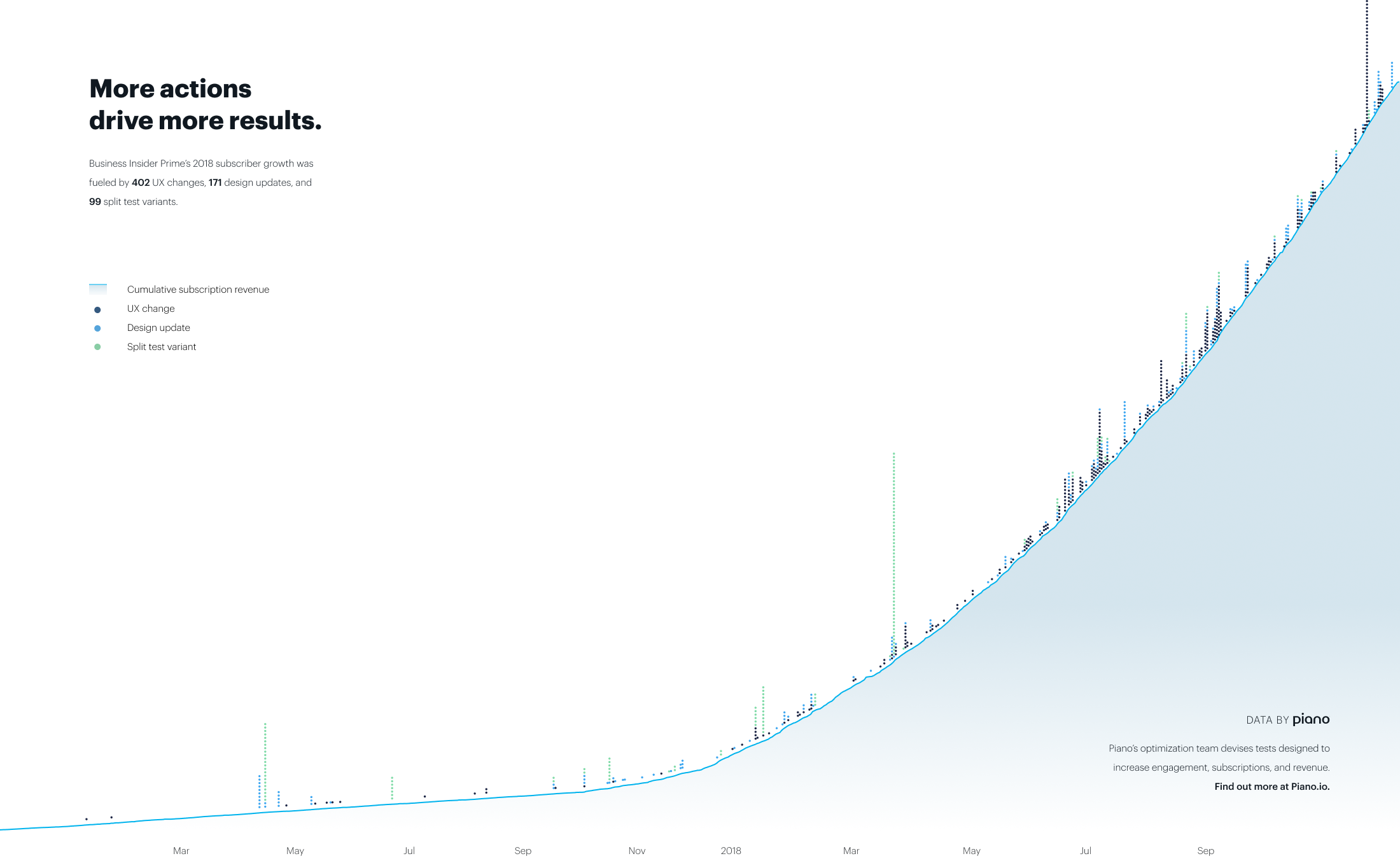 Business Insider’s subscriptions head on why business is booming

When Axel Springer bought Business Insider in 2015 at a valuation of $442 million, few would have predicted that the business-news site would follow The Wall Street Journal and Financial Times in successfully charging online.

But BI Prime’s impressive 2018 performance has proven there’s a real market for Business Insider’s brand of journalism. When BI Prime launched in fall of 2017, it augmented an existing paid offer — which allowed subscribers to block ads — with exclusive business stories. Since then, Claudius Senst’s team has dramatically grown its subscriber base through constant optimization. To understand why BI Prime has thrived, Traffic caught up with Senst at Business Insider’s offices. (Full disclosure: Business Insider uses Piano, which publishes this magazine, and Senst kindly complimented Piano within the interview.)

Q: How has BI Prime evolved over the past year?

Claudius Senst: One year ago, we had a very basic product. There was one offer: $1 for the first month and $9.95 for consecutive months. BI Prime consisted of just a handful of stories. We now offer monthly, annual, and two-year subscriptions. And our BI Prime coverage is much more robust. We have partners in place with whom we offer bundles. We’re leveraging Facebook for subscription acquisition. We work very closely with Google. We have a dedicated team of people working for BI Prime now, be it on the operations, product, or partnership sides. We’ve become a real product with a growing loyal audience.

We changed a lot in the last year, and I expect that change to continue. We are still very, very early. There’s a long list of things which we’ve yet to tackle.

How did you get the organization, especially editorial, invested in BI Prime?

It requires continuous effort to integrate a paid subscription offering within a digital publishing organization. What especially helped early on was the support of the Business Insider editorial leadership team — executive editor Matt Turner, in particular.

Whether a story becomes Prime depends on whether a story is “nice to know” or “need to know.” If it’s the latter, the story is tagged Prime and people will have to pay to read it. BI Prime stories are aimed at distinct audiences with strong professional or personal reasons to pay. For example, one of our best performing BI Prime stories gave behind-the-scenes insights into a complex M&A transaction. Another revealed salary structures at startups. What these two stories share is that they’re mostly of interest to specific audiences.

We were also very transparent with editorial early on about the impact of an individual story — creating a metric merging traffic and subscription data to show the real value of articles.

You’ve cultivated a culture of experimentation at Business Insider, constantly testing every aspect of BI Prime. Why is that so important?

Because there is no one-size-fits-all model. Audiences, products, and goals are very different for different news organizations. That’s why we experiment. But how we experiment is just as important. Initially I was very interested in doing as many tests as possible in parallel. Now, we try to come up with a hypothesis, we define success metrics, we quantify the potential effect. And based on that we rank the tests in our optimization planning calls with Piano. Because we don’t have as many tests running in parallel, we get to statistical significance faster.

What’s the cumulative effect of the experiments?

Look at the subscriber welcome email we just did — a personal message from our editor-in-chief — which was an idea we developed and executed together with Piano. Our A/B test on that email shows a meaningful reduction in churn just from this one message. That is not the solution to everything, but that email, along with a number of other measures, has led to a stunning drop in churn since the beginning of the year.

As Prime matures, what new skills are required?

I have young children at home, so I think about how a baby goes from not doing much of anything to crawling to walking. That’s the kind of rapid skill development we need because the technology cycles are getting so much shorter and the business models are getting less stable.

Look just at payment mechanisms, for example. We started with credit card payments enabled. Shortly after we added PayPal. Then we added Apple Pay. We are in the process of activating Facebook’s Instant Articles integration. That many different payment infrastructures require lots of dynamic reaction.

Babies and kids don’t know what they need to do in order to survive tomorrow — they just learn and evolve. The same is necessary for us.

Before BI Prime, you worked at BILD, Germany’s biggest newspaper, to help launch BILD+, which now has over 400,000 paid digital subscribers. How are BILD+ and BI Prime similar?

Over five years ago, I was part of the team that launched BILD+ in Germany. What we just discussed about BI Prime maturing as a product applies to BILD+ as well. Five years post-launch, BILD+ is a totally different product than it was at the outset. How the product looks, the payment flows, and much else has matured.

Obviously BILD+ is much further ahead in terms of scale and product details and so on, but BILD+ had an important advantage: people at least somewhat understood they had to pay for it. Before digital, in Germany you went to a kiosk and you bought BILD. That was a learned behavior.

With Business Insider we were in a different situation because our audience was not used to paying for our stories, so we had to overcome that.

What does the future look like for BI Prime?

One year in we definitely see the scale and the potential of the product. Because the hypothesis that our stories motivate people to open their wallets and expense accounts was true.

But we are still very early in our ventures into the enterprise space, where companies of all sizes — many of them Fortune 500 — want and are willing to pay for BI Prime access. That’s a focus in the near-term.

As BI Prime grows, how do its core challenges compare to those of other publishers around the world?

We are in a very similar position as BILD or WELT in Germany. Or to the Financial Times, The New York Times, The Wall Street Journal. At the end of the day, it is always about how to convince someone to pay for our stories. That is the only question.

It is not different — whether you are in the Nordics, Germany, Latin America, or the U.S. But there is no one-size-fits-all solution. You need to be very careful in crafting the message — why your particular story is worth that particular individual paying for it.

Those similarities and differences are why we can work very closely with other publishers. While there should be paid products for every consumer, not everyone has to buy all products. And we have learned a lot from exchanges with other publishers. If that kind of collaboration can be further encouraged across the companies Piano works with, that would be a win-win.

This interview was edited for length and clarity.