How ComiXology’s David Steinberger is taking the art form out of hobby shops, onto the iPad — and into the mainstream.

The secret origin of ComiXology began a little over a decade ago when David Steinberger’s parents moved to Florida, forcing him at long last to pick up the boxes of comic books he’d collected as a teenager. So he schlepped cardboard boxes from Louisville, Kentucky, to his home in New York, where he started to wonder why he couldn’t catalog his collection digitally the way he could CDs. Steinberger, then earning an MBA at NYU’s Stern School of Business, came up with a business plan to do just that. 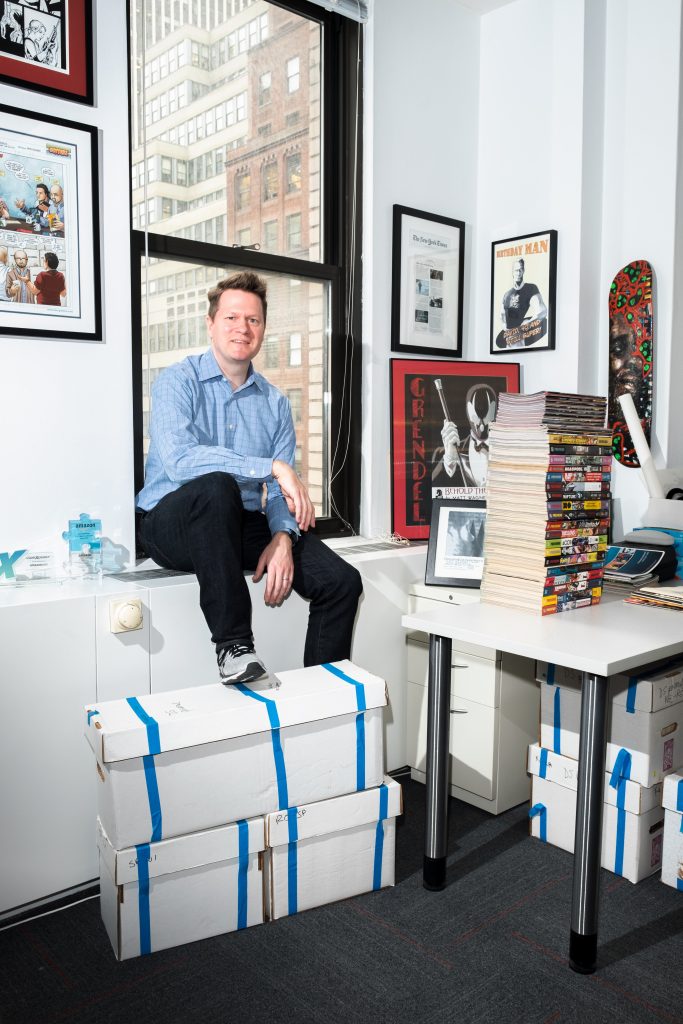 Now, Steinberger’s collection sits in five long cardboard boxes under the desk he uses as CEO of ComiXology, the leading online comics store, which has more than 100 employees and sells downloadable issues the way iTunes sells songs. In 2014, the company was purchased by Amazon, where Steinberger now runs the entire digital comics division. His office, in ComiXology’s New York Garment District headquarters, is filled with ComiXology posters, a brown bookcase full of hardcover comics reprints, and a page of original art from “Mage,” his favorite comic.

It’s tempting to imagine Steinberger as the King of the Geeks, since ComiXology dominates digital comics sales with both a download store and ComiXology Unlimited, a Netflix-style subscription service that offers a solid selection of comics for a monthly price of $5.99. Between the two services, fans can find the familiar Marvel and DC titles as well as thousands of indie comics and translated Japanese and French books — plus back issues, from the sixties to last year. But Steinberger is less interested in helping hardcore fans read old X-Men issues than he is in expanding the overall audience for the art form.

As a business, comics have long revolved around hobbyist shops that cater to a dedicated audience. At ComiXology, Steinberger says he actually wants see a decline in ARPU, average revenue per user, since that’ll mean he’s attracting new consumers. “Hopefully, as we reach new people, it will go down, then — over time — up,” he says. “I’m more interested in: Can we get people to come back and can we help them find books they’re interested in.”

There’s interest out there. Stories from comics dominate pop culture — think the Avengers and Justice League film franchises, or television series like “Supergirl” and “The Flash” — but the $1 billion U.S. comic books business is a rounding error in the overall entertainment business. This year’s “Guardians of the Galaxy” movie took in almost $390 million at the box office in the U.S., which implies that about 30 million people saw it in theaters alone. The month it came out, Marvel’s “Guardians” comics — which feature the same characters guarding the same galaxy — sold about 250,000 copies combined. Comics will never be as popular as movies, but the figures suggest plenty of room for growth.

ComiXology’s master plan for online business
1
Expand the audience.
”Until ten years ago, this was an adult white male audience,” Steinberger says. Comic stores were reluctant to stock up on titles aimed at other demographics, since they purchased product on a non-returnable basis. ComiXology sells a more diverse set of material — and attracts new audiences.
2
Make friends with media companies.
ComiXology won over big comics publishers by giving them input on pricing and allowing them to use DRM.
3
Digital doesn’t need to kill the radio star.
Online media businesses often replace their physical counter-parts — think Netflix and DVDs. But ComiXology sometimes coordinates with Amazon — “buy a physical graphic novel and get a digital one free,” Steinberger says.
4
Mix those models.
Most online media businesses offer either an à la carte menu (the iTunes store) or a single-price buffet (Netflix), but ComiXology offers both so all-you-can-eat content promotes additional sales.
5
Think globally.
American comic shops can only carry so much Japanese manga or French and Belgian bandes dessinées, but ComiXology has no such limits. Steinberger makes it a priority to get foreign publishers to sell English translations of their work. Readers who like it come back — and spread the word.

Steinberger believes that the existing comics business has kept the audience for the art form artificially small. Over the course of the eighties, comics publishers abandoned newsstand distribution in order to focus on hobbyist comics shops, which, unlike newsstands, buy product on a non-returnable basis. That gave publishers reliable cash flow, but it put all the risk on retailers, which became reluctant to take a chance stocking titles that didn’t appeal to young men. Over the long run, the strategy meant to protect the business seems to have also limited it — store owners like Comic Book Guy from “The Simpsons” don’t exactly set out the welcome mat for newcomers.

This has started to change over last decade, mostly thanks to increasing bookstore sales of graphic novels and paperback comics collections. There’s now a growing audience for graphic novels that tell the kinds of stories most Americans wouldn’t associate with comics — like Ta-Nehisi Coates’ smart take on Marvel’s “Black Panther,” the sharp science fiction story “Saga,” and the “March” graphic memoirs by Congressman John Lewis. Steinberger wants to serve this audience — as well as expand it.

Before Steinberger thought about expanding the online market for comics, he needed to create it. When he co-founded ComiXology, “Marvel and DC were freaking out about torrents,” he remembers. If publishers didn’t start selling content online soon, fans would get used to illicit downloading. As in other businesses, however, the established players had trouble getting into the digital market, in this case because they didn’t want to upset — or jeopardize the health of — the retail stores they depended on.

“The disruption had to come from outside,” says Rob Salkowitz, author of “Comic-Con and the Business of Pop Culture.” “That left room for a startup.”

Unlike other technology companies, ComiXology didn’t simply announce its terms and see which companies would sign on. Instead, it entered the market by giving physical stores a way to sell issues online, then began courting the major comics publishers by letting them protect their content with DRM — digital rights management software — and giving them some control over pricing. Those friendly terms made ComiXology the only online store to sell comics by market leaders Marvel and DC the same day they’re available in stores.

Once that happened, “everyone else became irrelevant,” Salkowitz says. “Whatever deal they gave Marvel and DC was worth it.”

The company also uses ComiXology Unlimited, launched in 2016, to market downloads in a way that other “all you can eat” services like Spotify don’t. Unlimited offers plenty to read, including indie hits like “The Walking Dead.” But it also makes available early issues from best-selling titles so users can sample and get hooked on a series before they read — and buy — later issues from ComiXology’s store.

This, too, has won the company friends among publishers. “It’s easy for a potential consumer to try out a book they may have heard good things about,” says Jim Valentino, a comics creator who oversees the Shadowline imprint at Image Comics. For Shadowline, he says, digital stores like ComiXology have increased sales without hurting those of physical stores.

ComiXology also serves different consumers, at least to some extent. The digital comics market in the U.S. is just a tenth of the overall comic book business, probably because hardcore fans like going to comics shops — more than DVD buyers like going to Walmart, anyway. The problem is that other readers curious about comics often find them hard to navigate. So ComiXology promotes accessible titles, and it’s now improving a recommendation engine to promote them to potential fans based on their taste. The idea is to create new regular readers to augment the hardcore fan base attached to the physical market.

“My vision is, let’s make the market bigger,” Steinberger says. “We just want people to come in and stick around.”