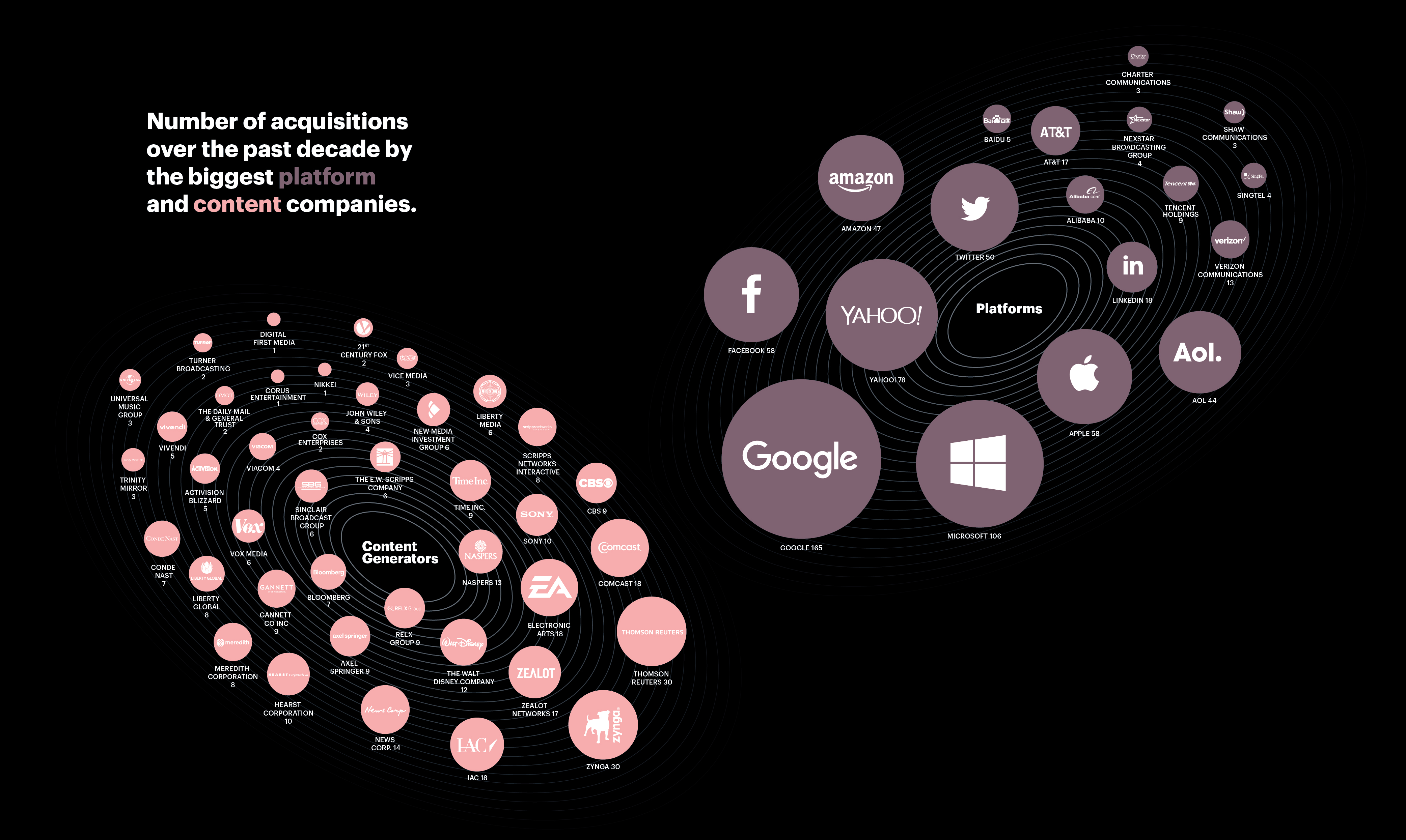 As content and tech firms crash together, they're buying every startup in their orbits.

Wishful thinking about media valuations meets cold reality when money changes hands. Compare the tens of millions it costs to acquire a buzzy startup to the many billions required to buy a stodgy old telecom, and it becomes clear how much certain types of media are really worth. Examine all media acquisitions over the past decade, and the state of the industry as a whole comes into view.

Media makes more money today than at any time in human history — $2.4 trillion worldwide, if you count platform companies such as AT&T as well as content companies like the Walt Disney Co. And that figure is rising fast due to an unprecedented appetite for media products: The U.S. Census Bureau estimates that the average American spent 3,532 hours consuming media in 2009, an astounding 9.7 hours per day. (The number implies that media consumption overlaps with more than 60 percent of waking hours). Media choices, which used to be defined by the number of channels on the television or the radio stations on a dial, have seemingly become limitless.

This abundance obscures the fact that the media industry — really a series of increasingly interconnected industries — is objectively more concentrated today than it was in the analog past. Digital luminaries expected the internet to usher in the democratization of media. Instead, the reverse is happening — the big are getting bigger.

In the U.S., according to Eli Noam’s magisterial 1,400-page tome “Who Owns the World’s Media?,” five companies now control more than 44 percent of the media market by revenue: AT&T, Verizon, Comcast, Charter, and Google’s parent, Alphabet. And that level of consolidation is low compared to most of the rest of the world.

The media is in what scholar Victor Pickard calls a “constitutive moment” — a confluence of policy, technology, and business economics that could lock in the media landscape for a generation. If you stare long enough into the media galaxy, you can see the forces responsible for this consolidation. And get a sense of how the media empires of the future will be built.

Global giants are reshaping the media in some important ways…

#1 Media is hitting a growth spurtThe global media and entertainment business will increase by about 60 percent between 2011 and 2020, according to PricewaterhouseCoopers’ “Global entertainment and media outlook 2016-2020.” This growth, other research shows, is expected to be driven by internet access, advertising revenue, and video games. The fast-rising dark horse of media, video games use an array of business models to generate revenue — as much as $75 billion this year worldwide. The business now surpasses newspapers, radio, movies, and music in revenue, and is set to overtake magazines, PwC said.

High-cost, high-gloss, high-production-value content is now able to reach a truly global audience, making the potential returns on blockbuster content greater than ever before. Disney’s $4 billion acquisition in 2009 of Marvel Entertainment, for example, has already paid for itself. Even in the digital age, flicks with iconic characters draw crowds — no matter who wears the cape.

In 1984, the content sector’s concentration levels in the U.S. were only 13.3 percent those of platform companies, according to a widely used market share formula. By 2012, according to Noam, the level in the U.S. had jumped to 70 percent. While the platform sector remains far more concentrated on an absolute basis, content has been consolidating at a much faster rate: 3.3 percent a year, versus flat to slightly negative in recent years for platforms.

#4 Platform players face a strategic choice
GOBBLE UP OTHER PLATFORMSExpand vertically by acquiring other platforms, as AT&T did buying DirecTV last year and Facebook did when it purchased the messaging firm WhatsApp for an eye-catching $19 billion.

INVEST DIRECTLY IN CONTENTOr join the new breed of giant “hybrids” and expand horizontally into content, as Verizon did with its 2015 purchase of AOL and Comcast did when it bought GE’s stake in NBC Universal. Amazon.com and Netlix are making the same kind of bets by developing their own television series and movies.

#5 If content was ever king, it certainly isn’t nowThe platform business, mostly telecom and cable, generated $1.7 trillion in revenue as of 2013, which is 2.3 percent of world GDP — more than twice the $735 billion generated by the content industry, according to Noam. Of the world’s 10 largest media companies, all are principally platform firms and most are telecoms, starting with the China’s state-owned enterprises, AT&T, Spain’s Telefónica, Japan’s NTT Corporation, and Verizon. And even those numbers understate the gap. Noam, for instance, counts Google as a content company because of the search results it generates. But most people think of it as a platform that points users to other content.

#6 The amount of no-cost content is crazyThe Rumpelstiltskin fable turns out to be true: User-generated content proves that straw can be spun into gold. Just ask Facebook. It helps to start with a lot of straw: Every minute, 500 hours of video are uploaded to YouTube, Facebook users write 293,000 status updates, and 48,611 photos are posted to Instagram. This content, as well as the data it generates, has become as valuable en masse as anything created by professionals.
#7 Platforms have the power

Big content companies have traditionally controlled their own infrastructure — newspapers had printing presses and fleets of trucks. If they didn’t own the pipes outright, they leased them by inking contracts with distributors, like a TV station might with a cable company. The rise of user-generated content upended this order. Now, platforms like Facebook and YouTube don’t need to buy content the way cable channels, and even Netlix, do. (YouTube might want more professional shows, but its users won’t see static if it can’t get the deals it wants.) That has given content distributors more leverage than ever.

#8 Platforms ate the online ad businessTraditionally, platform companies have made money by getting customers to pay for services (like telephone or cable) and by serving as a middleman between the creators of content and their customers. But platforms such as YouTube and Facebook combined previously unimaginable scale, cheap user-generated content, and enough consumer data about users to become the biggest players in digital advertising. Google now gets 12 percent of the world’s total advertising dollars.
Ad tech is bought, not made

#9 Publishers have a supply and demand problemContent producers of varying sizes will continue to create a media abundance, of sorts, albeit along a lopsided quality spectrum. At the high end, Bill Simmons, formerly of ESPN, recently launched The Ringer, a sports content operation backed by Time Warner’s HBO, while Condé Nast’s Vanity Fair is backing Hive, covering business, technology, and politics. At the low end, who knows? The vast majority will be consigned to the internet’s “long tail” of clickbait sites commoditized by Facebook.

#10 Content wants its crown backPaid services like Netflix and the New York Times are challenging the presumption that content online should be free — and getting a piece of the biggest revenue stream in media. In the $2 trillion global media business, only about $542.6 billion will come from advertising this year, according to the research company eMarketer. Much of the rest comes out of consumers’ pockets. The trick is getting users to pay directly for content, not just access to content. And, of course, having content people will pay for.