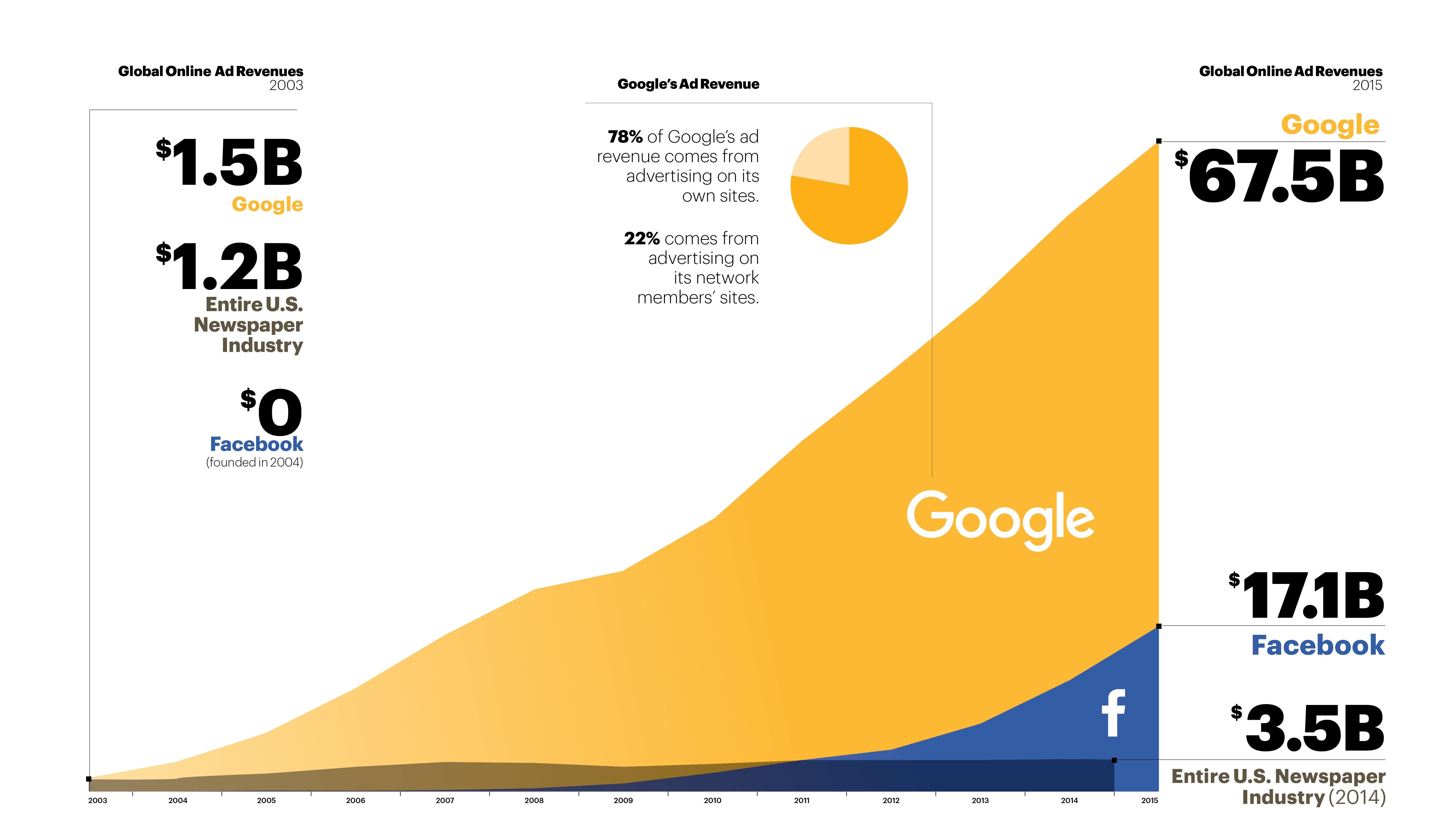 Digital advertising is booming, but the game is winner-take-most.

In online advertising there are Google and Facebook, and… everyone else. The two Silicon Valley juggernauts’ combined digital advertising revenue is now about 24 times that of the of entire U.S. newspaper industry. Sure, the overall online ad pie is growing — up 21 percent last year alone — as digital displaces television and other musty mediums. But so too is the duopoly’s appetite. In first quarter of 2016, the two giants reportedly took in 85 cents of every new online advertising dollar spent.

What crumbs Google and Facebook leave behind in the U.S. are mostly hoovered up by other tech giants, including Yahoo (recently acquired by Verizon), IAC, Microsoft, and Twitter. In the last quarter of 2015, according to a PricewaterhouseCoopers study, the top 10 online advertising companies in the U.S. accounted for 75 percent of the domestic digital ad market.

What does that mean for older, traditional publishers? Basically, they’re screwed. A June Pew Research Center report captured the bleak outlook for the American newspaper industry: “Fully one-fourth of advertising revenue now comes from digital advertising, but not because of growth in that area: Digital advertising fell 2 percent in 2015,” according to Pew. “It’s just that non-digital revenue fell more, dropping 10 percent in 2015.”

So what’s a publisher to do? Many have embraced Facebook’s Instant Articles, which allow them to publish their articles directly on Facebook’s pages and either sell ads themselves (taking in 100 percent of the revenue) or have Facebook sell them in exchange for a 30 percent cut.

“Facebook has a good story to sell publishers,” says Christopher Reid, the chief executive officer of Sortable, a company that seeks to maximize publishers’ digital advertising revenue. “They’re saying they’ll clean up the ad environment and make a great user experience.” This might make sense in the short term for desperate publishers, but Instant Articles restricts advertising formats and doesn’t integrate with subscription products — which is why titles such as The New Yorker aren’t on it. Reid fears Facebook “is selling publishers the rope that they’re going to hang themselves with.”